Saco saves some data to give you a better experience. By using Sacos services, you agree to this.

Do you think that education will pay off?

Saco, the Swedish Confederation of Professional Associations, is a politically independent central organisation with 21 unions. Altogether, we have 960,000 members.

Our members are professionals with qualifications from higher education. Our unions represent different professions and our members are employees, students, business owners, jobseekers and pensioners.

Saco promotes its members' interests and supports its unions through analyses, debates and shaping opinion. The confederation conducts studies and publishes reports, arranges seminars and activities, and participates in many different contexts in order to influence political decision-making.

Saco's aim is to develop and improve employment conditions and professional activities for professionals in Sweden. Central issues are job security, rights, salaries, the working environment and the quality of education.

We fight so that education to be rewarded. The aim is a society with good economic growth and knowledge-based success. Education and research are key components in economic growth and societal development, which why they must be regarded as important investments for both society and individuals.

Collective agreements and the Swedish model

A great many of the rules of the Swedish labour market are decided through negotiations – collective bargaining – between employees and employers. The unions represent the employees' interests – salary, working hours and other conditions – vis-à-vis their employers. A collective agreement records what the parties agree on. This system of regulating the labour market through collective agreements instead of legislation is widely called the Swedish model.

Saco believes that collective bargaining is a good, practical system that can be adapted to the conditions of various industries and workplaces. If a conflict arises between an employee and an employer, it can be resolved more quickly and cheaply via a union-led negotiation than via the courts. The content of a collective agreement is based on what the employee and employee arrived at together, so no one needs to negotiate alone. Professionals' collective agreements do not regulate individual salaries, but the employees' salaries must remain within the framework criteria that have been negotiated. Discussions are now being conducted about how collective agreements and the Swedish model can be modernised and adapted to new conditions.

The Swedish Employment Protection Act (LAS - Lagen om anställningsskydd) protects employees during redundancies and regulates various forms of employment. Labour law is an important issue for Saco and, on the whole, we believe that LAS works well in the way it is currently applied. Saco's experts work on lobbying legislators for the creation of a labour market that is both flexible and secure. The 21 Saco unions help their members via advisory services and in labour disputes.

While LAS regulates employment, the purpose of the Act on Co-Determination in the Workplace (MBL – Medbestämmandelagen) is to give employees influence and co-determination on important issues in the workplace. Quite simply, MBL regulates collective workers' rights. This means that the employer is obliged to provide information about the organisation/business, including its finances, and to negotiate with the union before decisions are made on issues that relate to important changes. For MBL to apply, there must be a collective agreement at the workplace.

Each union works with its members' professional issues and provides individual support. However, the Saco unions cooperate in workplaces and local unions conduct much of the unions' activities. Saco's unions and negotiation organisations support local activities. This is done based on labour market sectors, so that the conditions at every workplace are taken into account.

Saco is politically independent. This does not mean that we decline to act on issues because a political party has adopted a particular position. Nor does this mean that we decline to cooperate with and try to influence politicians on issues. However, it does mean that we concentrate on issues that relate to professionals' employment, education, research and the labour market. By debating and creating opinion, we increase understanding for professionals' working conditions and the importance of academic expertise. Our primary issues relate to the labour market, labour law, integration, international cooperation, gender equality, salaries and agreements, financial policy, taxes, social insurance, education, and research and development. Saco therefore strives for political influence. 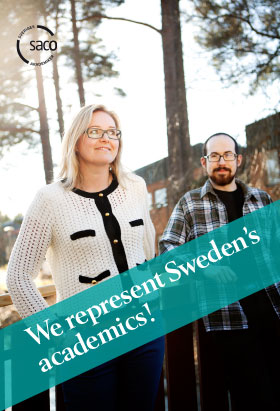